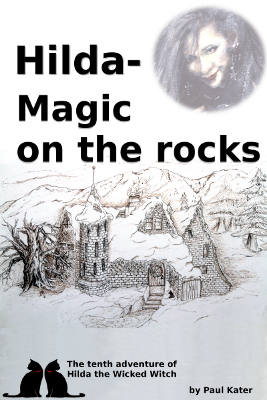 As I occasionally am curious about how people perceive the books of our beloved Wicked Witch, I made my way over to Amazon.com to see if there are any new reviews. To my delight, several people left reviews for Hilda – Magic on the Rocks. 5 reviews, and all of them 5 stars!

If you want to see all of them (I know I do!) you can follow this link.

The newest review I found there says:

Classic Paul….10 stars….oops 5 out of five!Great continuation with affiliation….The characters are amazing with or without introductions. Any of these characters could have a spin off created and based on new individual story lines. Wonderfully written by a great story telling word wielding phonetic word webbing genius. If you haven’t read any of the books, then you are missing a treat. I recommend that you start with book 1 Hilda the Wicked Witch the rest are listed in order or by date published…So go on, buy them, read them…Enjoy them…I did!

At times I come across a book review where the reviewer is doing it wrong. Oh, you might ask, how can a book review be wrong? After all, a review is highly personal, nobody can tell me how I write my review?

True, in the end it is up to the reviewer. However, there are a few things that would be good to keep in mind.

Perhaps the most important one: don’t spoil the entire story. No matter how enthused you are about the book, it is not in good taste if you give away the entire plot. That takes away the entire fun or excitement for readers who have yet to start the book.

Don’t say you disliked the book without telling why. Your reasons are what make your opinions interesting.

If you feel something is wrong with the book that has nothing to do with the story (for instance the formatting, the spelling or the editing), don’t put that as the most important issue in a review. Reviews are not for these things. In that case see if you can get in touch with the author. Most authors have a website with a contact-link, many of them are on Facebook or on other social media.

If you stick to these simple things, I am sure that your reviews will be most helpful to the author and other readers.

Today I found a few amazing reviews on Hilda – Cats that I just have to share with the world.

I really love this series of books. They are extremely entertaining. When I see a new one, I drop everything, get it, and read it.

Characters are very well presented, you really do get to know them and look forward to the next book. Usually a series of books kind of sputters a bit as it goes on. Not this one! These books just go a completely different direction, and are simply as great reading as you could possibly imagine.

I would suggest starting at the beginning though, the books do progress through the lives of the “sweetwitch” and her wizard.

If I have any complaint it is that I have gotten the whole series here on Amazon for free, and that seems wrong to me. Any author that has worked as hard as this one has certainly deserves to be paid!

Thank you very much Mr. Kater!

You are more than welcome, JohnR! And then there is this review, rated 4.0 out of 5 stars:
The most enjoyable Fantasy I Have read in A While, By Laura S. Heinzel (Corpus Christi, TX)

Paul Kater wrote 6 Hilda – Witch stories. This one was one of my favorites. They are a series & need to be read in order, to make better sense of them. As I am a cat lover this one was endearing. Kater takes you right into his alternate world of magic as you fall in love with with his witchy withches for good or not so good. It is hard to put these books down. You manage to want to go right on to the next. I love his flow of the language as he develops these characters in extreme detail that one manages to fall in love with. Last of all the scenery is so descriptive, you can feel the houses come alive and the kitties purring in your lap.

Thank you. Also to all the people who read and enjoy Hilda without leaving a review. I feel honoured.

I once posted about the value of reviews for authors, and the way they can influence or help the author in his or her writing. One of the most unnerving things about a review is that it can be a bad one. This is also known as the negative, or “no star” review.

But how bad is such a review really? In my view it is more important to see how many of those there are. Is there only one bad review, and the rest is at least average, then it is important to realise that the one bad review is an exception. It is always possible that someone reads your book and does not like it.

What does the majority of reviewers say? Do they like your book? Or do they all blast it? In the former case, you don’t have much to worry, except perhaps how to maintain or improve your quality or writing. In the latter case you should seriously reconsider your work. Perhaps you are not writing in the proper genre? Perhaps you went out on a limb with this book and slipped?

Be realistic: not everyone will love the fruits of your hard-wrought labour. There will always be people who like romance more than science-fiction, people who think a fantasy-story about elves is much better than the coolest blood-ridden vampire horror. As I see it, there are two things important: 1 – that you love what you made, and 2 – that the majority of people who read it do as well.

Reviews are nice things. Authors often consider them precious things even. Reviews and other comments are very convenient “tools” for an author to determine if she or he is doing something right.

Are the stories still interesting? Are there things in a story that irk a reader? Are there suggestions hidden inside the reviews? Things like that act as a thermometer for the ‘health’ of an author’s writing.

Of course, a writer does not set her or his sails on reviews alone. There is always the creative flow that keeps going, which, like a river, can meander left and right through the landscape of imagination.

But let’s come back to reviews. For instance, on Smashwords I found a review stating:

I just finished the latest Hilda book. I thoroughly enjoyed all of them and very much appreciate the authors hard work on these stories. They are well written with entertaining story lines, I would like to see more of the retelling of classic fairy tales by the way!

Now, it is always a pat on the back of a writer’s ego to hear or read that her or his work is appreciated, but the trick in this part of a review was this bit: “I would like to see more of the retelling of classic fairy tales by the way!”

It was this that made me think about a new Hilda story which incorporates another fairy tale. This review was posted on “Hilda – Cats”, the fifth book in the series, and only as I am designing book 9 this seems to come to life.

There were several reviews on the first Hilda book which stated it was poorly written. So I reworked the story and made a new version available, which is more coherent, many typos and other errors are removed and in general it became a better book. (Well, at least I think so, you be the judge, dear reader.)

Another example is a comment I found on the cover-art image for the first book of Lily Marin. Someone posted:

Just a short and simple comment, perhaps, but it does motivate me to keep writing Lily’s stories as well.

So you see: reviews can influence a writer, and help her or him to know what the readers like. Of course there is a message in this article. In case it was not very clear, I shall take it upon myself, dear reader, to spell it out just this once:
If you have read a book and you have comments about it, good or bad, it is very much appreciated if you take the time to leave a review or just a small note on the website where you found the book. It helps other people decide if it is worth acquiring the book, and it also tells the author a lot.

Thank you in advance. On behalf of the all the authors who appreciate reviews.