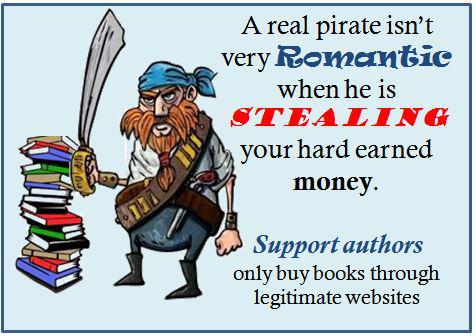 More and more pirating-websites pop up that offer free downloads of thousands of e-books. That is of course good news for readers, but for writers this is far less good. Books that were written with a lot of effort and in a lot of time are also offered for free there. Please respect the hard work and dedication of an author and stay away from those sites. If you can’t afford a book, get in touch with the author and explain, often they are willing to send you a free copy.

(with thanks to Lynn Plunkett Ricci for creating this image and allowing me to use it.)

Teleread‘s Julie Moore tried to answer that one:

Piracy is an endlessly debated topic. Views on it range from “don’t worry about it too much” to“it has a huge impact on sales.” What is often ignored are the reasons why people pirate and, from there, what publishers could do about it. 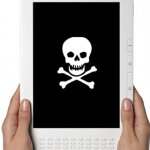 I’ve hung out in forums with e-book pirates. I’ve read about the subject, and I think I can distill my observations down to three main reasons why people pirate (or why they justify it to themselves). In this article, I’ll examine them. In my next article, I’ll discuss how understanding the reasons can lead to practical ways to reduce book piracy.

I expect this article to generate comments—some of them heated. Please understand that I’m not justifying or supporting the reasons presented below. I’m just reporting on my observations over the years.

There are a lot of “collectors” of e-books. I used to hang out on alt.binaries.ebooks, and I saw this syndrome frequently. People would just upload their entire hard drive worth of books. Think on the order of hundreds, if not thousands. I doubt many of them even read the books. In fact, I’m sure of it. Frequently the books in the archives were unreadable, or not even the same book as listed.

By the way, the same syndrome exists in the non-pirating e-book reader. A while back there was a thread on a Kindle group about, “How many books do you have on your Kindle?” I remember one person posting that she had over 4,000, almost all acquired as freebies. I doubt she’ll read even a quarter of them, and she’s probably still downloading more today.

I see this sentiment over and over again on message boards, forums, and in the pirate community. Some express it by only downloading free (but legal) books. Others pirate. While there is some overlap with the collector, many of these people do read the books they download. They either will not or cannot spend money on books.

And before you say something like, “you spent money on an e-reader; don’t tell me you can’t afford books,” stop and consider that e-readers are frequently given as gifts, especially to older adults. A significant percentage of the members of the Kindle Korner Yahoo group are retired adults on a fixed income. They have lots of time to read, but they can’t afford to buy many books. Students are another example. Many of them read on cell phones or their computers, but don’t have the discretionary income to buy books.

3. The Book I Want Isn’t Available As An E-Book

Fortunately, this is becoming less common in the United States. But with territorial restrictions, it’s still a huge problem in other countries. Globalization and the rise of the Internet have exposed us to content we wouldn’t have known about 10 to 15 years ago. It’s human nature to want something that looks interesting. It’s also human nature to be annoyed when we can’t get something, and to look for ways to acquire it.

While this problem is lessened for recent books, it’s still evident for backlist titles. And even when backlist titles are available as e-books, they’re often riddled with formatting and scanning errors. If you can find an older book on a pirate site, it’s often been scanned and corrected by a community of readers. I completely agree with the frustration of “I paid $7.99 for that!” Personally, I deal with it by extensively reading reviews of backlist titles, and avoiding the ones that seem to have problems. And no, I don’t then go pirate the book. I just move on to something else. There are more books available that I want to read than years in which I have to read them.

You can probably come up with other reasons for book piracy, but these are the big three I’ve observed over the years. Next, I’ll discuss ways publishers could reach these readers and sell books to them, assuming they want to solve the problem instead of just complaining about it.