Via Teleread I came upon this amazing bit of text and video about a world record breaking event: a domino chain by books, done by students and taking place in the Seattle Public Library:

I don’t believe I’ve ever seen an actual book domino chain in person. I’d never even seen a video of such a thing until earlier this afternoon. But apparently enough of them have been created over time that an actual Book Domino Chain World Record holder exists out there, somewhere.

And yet that person (or that institution, as the case may be) had its world record stripped away roughly four weeks ago by none other than the main branch of the Seattle Public Library. Officially known as the Central Library, the building became architecturally famous worldwide back in 2004, thanks to its fantastic and futuristic design by Rem Koolhaas.

As reported today on BoingBoing, the library “kicked off its Summer Reading Program by smashing the world record for a book domino chain,” which was “laid out in the library’s beautiful main branch, and was made up of 2,131 library discards and donations.”

According to a note on the library’s website, the books used in the domino chain (which required 27 college-aged volunteers to construct) will be sold as souvenirs at an upcoming Friends of the Library event. Watch the video below, and see if it doesn’t completely blow your mind. Vodafone Romania, in collaboration with a publishing house Humanitas, launched an ambient advertising campaign, which is simply fantastic. A Victoria Square metro station was turned into… a digital library.

The walls are being covered with large format posters, from top to bottom. Bucharest commuters who enter the station suddenly discover that they’re in an impressive library. The brightest idea comes here: you can use your smartphone to scan QR codes visible on the spines of the books – to actually start reading a book in no time.

Once you grab the code, you’ll be redirected to a mobile site powered by Humanitas. It’s a Vodafone Digital Library from where you can download free samples of 49 ebooks (epub or pdf format) and 10 audiobooks. The download is available to anyone, no matter the telecom provider they have.

One title is available for free download, the full version of Mateiu I. Caragiale’s Under the seal of mystery. If users would like to purchase any other title from Vodafone Digital Library in full version, they will be redirected to Humanitas website, where they proceed to check out.

Vodafone’s digital library on the Victoria subway station is a part of the new communication platform launched by Vodafone in May 2012. 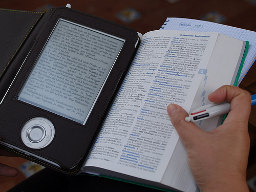 Macmillan has long been on one the major publishers who has completely refused to sell ebooks to libraries but it looks like that might have changed. News is breaking today that the publisher is working on some type of pilot program which will finally bring Macmillan ebooks to US public libraries.

Details are vague, but that will not stop many from reading too much into it and getting their hopes up. PW reported that Macmillan reps have confirmed the existence of the pilot but didn’t disclose any other details. “We have been working hard to develop an ebook lending model that works for all parties, as we value the libraries and the role they play in the reading community,” reads a statement provided to PW. “We are currently finalizing the details of our pilot program and will be announcing it when we are ready, and not in reaction to a demand.”

While I won’t read too much into this bit of news, it is still a good sign. Well, it would be more accurate to say that in the case of Macmillan any movement that doesn’t include actually firebombing libraries is a good sign.

Clearly Macmillan is following in Penguin’s footsteps in at lest dabbling in the library ebook market. Penguin started a pilot program with the NYCPL back in June of this year. Of course, like Penguin’s pilot the upcoming Macmillan program will likely also be a sucky deal for libraries.

Penguin’s pilot involve the 3M Cloud Library selling library ebooks on a 1 year expiring license, which is their own unique way of jacking up the price. It’s a pity they are not more open about their price gouging; at least Hachette and Random House were more direct when they doubled and tripled the prices for library ebooks.

Ranting aside, there is another alternative for libraries. They could always buy ereaders and ebooks on the consumer market and led those out to patrons. Of course, this gets into the issue of accessibility, which some libraries like the Sacramento Public Libraryfound out the hard way.

And so the library ebook stumbles on for one more day.

Who Left A Tree, Then A Coffin In The Library?

It started suddenly. Without warning.

Last spring, Julie Johnstone, a librarian at the Scottish Poetry Library in Edinburgh, was wandering through a reading room when she saw, sitting alone on a random table, a little tree.

It was made of twisted paper and was mounted on a book. Gorgeously crafted, it came with a gold-leafed eggshell broken in two, each half filled with little strips of paper with phrases on them. When reassembled properly, the strips became a poem about birds, “A Trace of Wings” by Edwin Morgan.