There are times I don’t write. This doesn’t mean writing isn’t on my mind though. Last Sunday afternoon I discovered a problem in a story. Something crucial was missing and I had no idea what the crucial part was. Staring at the screen did nothing crucial for me or the story so I decided to do something drastic. I went outside for a walk. 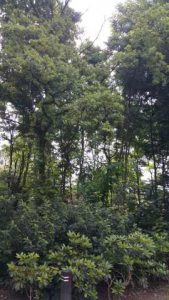 This is not a hazardous thing because I live in a nice area. These trees for instance are between the front door and the spot where I usually park my car.

I picked a good moment of the summer Sunday too because it wasn’t raining at that moment, and even many clouds had better places to go so I found myself facing sunshine. Very uncommon in these areas lately although I am not complaining.

After about 15 minutes I was wandering through my favourite forest (because it’s so close to home that I can walk there easily) and at a certain point I had the choice to go left (where I had never gone) or right (where I usually go). I went left.

To my surprise I came upon a small lake. I had never seen that before! Amazing how lakes suddenly appear when you turn left. The soil around the lake had suffered from the rainfall. The sound of my shoes was interesting, to say the least. The water that seeped into my shoes was less interesting but colder, probably to make up for the difference. 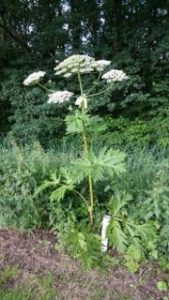 On the way back home I came across this fellow.

It’s a Heracleum sphondylium, commonly known as hogweed or cow parsnip, and a big one. It was as tall as I am!

I left it there as it looked happy where it was.

Incidentally in Dutch this plant is called a Bear claw.

The last special thing I encountered was this colourful bench in a park. Whoever the artist (or artists) was or were did a great job on creating something joyful!