Thanks to Valerie Douglas I came upon a link to the Huffington Post which had a very amusing list of habits of writers of old. It’s so entertaining that I can’t keep it from you!

• Poet and playwright Friedrich Schiller was very particular about his writing process. He worked mostly at night and hung red curtains in his study so sunlight never illuminated the room. If he grew tired, Schiller would dip his feet in cold water so that he could stay awake and write. His most peculiar habit, however, involved fruit. He kept a drawer full of rotten apples in his study. The spoiled food created a stench that Schiller’s friend Johann Wolfgang von Goethe found repugnant. However, according to Schiller’s wife, he “could not live or work without” the awful aroma.

• Alexandre Dumas, père, was a prolific writer, penning over three hundred works in his lifetime. Dumas once bet that he could finish a novel within three days, and won. Colors were essential to Dumas’ writing process. He wrote poetry on yellow paper, articles on pink, and novels on blue. When vacationing in Eastern Europe, Dumas was unable to replenish his stock of blue paper, and had to use cream pages. He was convinced the color change had a negative impact on his writing at the time.

• Victor Hugo wrote The Hunchback of Notre Dame under duress. In the fall of 1830, he had a matter of months to finish the book. Every week he was late delivering the manuscript, Hugo would be fined 1,000 francs. To insure ultimate productivity, Hugo put himself under house arrest. He locked up his clothes and outfitted himself in a long gray shawl. If he couldn’t get dressed, then he couldn’t go out. It was an effective solution. In this unusual costume, Hugo raced toward, and ultimately met, his deadline.

• Edgar Allan Poe had a beloved pet cat named Catterina. The affectionate feline would climb up and roost on Poe’s shoulders while he wrote. She would remain there, observed a visitor, “purring as if in complacent approval of the work proceeding under [her] supervision.”

• French novelist Colette was crazy about animals. Her enthusiasm for her pets prompted her second husband to complain, “When I enter a room where you’re alone with your animals, I feel I’m being indiscreet.” In fact, Colette had a creative ritual of plucking the fleas from Souci, her French bulldog, until she was ready to write.

• Gertrude Stein found inspiration in the driver’s seat of her Model T Ford. Stein would wait in the car while her partner, Alice B. Toklas, ran errands. She jotted down poetry and prose on scraps of paper while busy Parisian traffic zipped by. Stein owned two Fords in her lifetime: the first she dubbed Auntie after a relative who “behaved fairly well most of the time if she was properly flattered,” and the second, which lacked any bells and whistles, was named Godiva, after the naked heroine.

• As a young writer Virginia Woolf preferred to stand while she wrote. Her desk was three and a half feet tall. Quentin Bell, Woolf’s nephew, concluded that the habit was spurred by sibling rivalry. Woolf’s sister Vanessa was an artist who painted at an easel. Bell noted, “This led Virginia to feel that her own pursuit might appear less arduous than that of her sister unless she set matters on a footing of equality.” Eventually Woolf transitioned from standing to sitting.

• In his late twenties, James Joyce wore a white coat while he worked. He’d put it on, climb into bed, and compose his work with a blue pencil. His sister Eileen noted that the coat “gave a kind of white light” that helped him see the page. Joyce battled eye diseases throughout his life. As his sight worsened, the resourceful author magnified his entire creative process, writing intricate sentences with colored crayons on large pieces of cardboard.

• Agatha Christie had a specific demand for the bathroom of her mansion. She told her architect, “I want a big bath and I need a ledge because I like to eat apples.” This was not simply a luxury for the novelist. The bathtub was her prime work space. There, in the warm water, she devoured apples and devised intricate plots.

(Thanks to the Huffington Post for supplying this wonderful information!)

Today an icon of Science Fiction writing has left us. Ray Bradbury passed away today at the age of 91.

The man who most people will remember as the author of Fahrenheit 451 has left behind a tremendous amount of stories and short stories.

He will be missed and remembered by many. 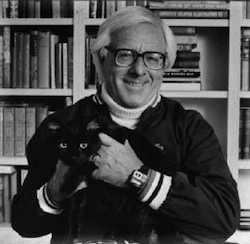