Here is the second part in the short series in which my fellow members of the APG tell what made them write their first book. This time: Donna K. Fitch.

Out loud: “Yes, may I help you?” In my head: “Where is the librarian who’s supposed to be watching the reference desk?”

“I just have a quick question,” the man said, sticking his head in my office doorway.

It was summer, and the university library where I worked was nearly deserted. I was deep in—something or other—when he interrupted me. I don’t even remember what his question was, because of what happened next.

I stood up quickly to show him where whatever he needed was—stepped on the hem of my wide-legged trousers, and fell, slamming into the air handling unit under the window on the way down. My left shoulder was a flame of agony, and I realized my arm had popped out of the socket. I groaned something in response to the patron’s anxious question. When I moved my arm, the joint slipped back into place. My ankle grabbed my attention next. It was throbbing in time to my heartbeat.

Things happened quickly after that. The patron returned with the library director, who had already called an ambulance. As the paramedics strapped me to a board and cushioned my neck with a brace, despite my insistence that I hadn’t hit my head, the librarian who was supposed to be on duty walked up and said the universal line, “But I was only gone a few minutes.”

Two months of physical therapy on my shoulder followed, and not nearly as much on my sprained ankle. The therapy consisted of manipulation of the joint by the therapist, and exercises at home. But at the end of each session, came the part I actually enjoyed. I would lie on the table and have either an ice pack or electric therapy applied to my shoulder. (I’m not sure what the therapy is really called; it was tiny, tingly electric shocks.) In that awkward position, I couldn’t read comfortably. Kindles hadn’t been invented yet. All I could do was lie there and let my mind roam.

And roam it did. I’ve always loved to write, since I was about twelve, and I took creative writing in high school, but I’d never written anything substantial. For some reason, though, bits of a novel started creeping into my head.

What if an ordinary person suddenly felt like he was a soldier in the American Civil War, being pursued by someone who wanted to kill him?

That seed started what is now Second Death. (At various times it was called Already Dead and A Debt Past Due.) As the head of reference in an academic library, I had plenty of opportunity for research. Although I read lots of books on how to write, I didn’t really know how. Second Death went through about twelve drafts before I figured out the story’s direction, and another seven or so drafts to come to the conclusion.

I spent what seemed to me to be a great deal of money to have it professionally edited, but I was proud of it and wanted it to be the best it could be. People who read it, whose opinion I trusted, as well as my editor, thought it was excellent. I shopped it around with high hopes.

Nope. Nobody wanted it. Not what they wanted.

I wrote another novel, The Source of Lightning, in the meantime, and some short stories and novellas.

I joined the Indie Publishing Revolution and published both novels myself in a circumstance that’s a whole ‘nother story in itself. The traditional route may be fine for some people, but it’s not for me. I’ve learned so much on the journey, about writing and editing and marketing. I wouldn’t trade it for the world.

Except maybe the shoulder dislocation part.

Ebook Short Description: Mark’s life has gotten complicated. On top of his blackouts and visions of desperate
pursuit by Yankee bushwhackers through a Southern forest, his wife Janet’s
accidental revelation rocked his confidence in their relationship. She wants
him to consult her psychic ex-boyfriend Daniel about the visions. His suicidal
father claims their family is cursed. His sister backs it up with accounts of
disturbing deaths of past relatives. Now he’s tempted by Victoria, an alluring
woman who offers to help him sort out his problems. But why is her aunt with a
fetish for mathematical calculations interested in their relationship? Why are
the visions increasing in intensity? And why does he get the feeling his
father’s ravings about a curse were all too true?

Second Death got me in an incredible way. The story began interesting, moved to and  fro without becoming a puzzle while a puzzle was in fact unfolding on the pages, among the members of the Giles family. Spanning many generations, a big family issue is coming to light. An issue so complex and mind-boggling that people to try to use the power that envelopes it for their own plans.

Follow the astounding discoveries of Mark Richards as he works his way through libraries and history, flashbacks and revelations.

And the end? I’m not going to tell you, read it yourself. One thing’s certain: I didn’t see that one coming.

The Color of Darkness and Other Stories 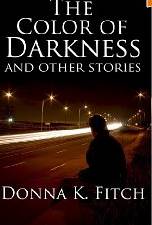 The Color of Darkness will change the way you look at your morning commute.  Sienna Shelby insists she can divine the future by observing the patterns of vehicle colors. Courier Brendan Mitchell, who drives the interstate every day, is skeptical. But will their relationship succeed when her powerful employer warns him to stay away from her, and when Sienna herself warns Brendan that fate has something dangerous in store for all of them?
Detour: A peaceful walk with your grandfather may evoke memories you’d rather not experience firsthand.
Quantum Critique: Does criticism of a painting literally destroy it? 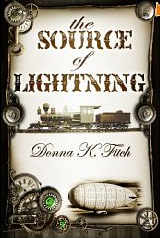 Title: The Source of Lightning

The Source of Lightning is written by an independent writer. I tend to drift towards indie writers more and more, probably because I am one myself. But that aside.

The start of this book is surprising. It’s a steampunk book but starts out feeling like a western. This changes quickly, and before you know it you are immersed in aether, airships, father-son difficulties and all kinds of relational problems. The main characters are thrown in deep and sometimes boiling water by Donna K. Fitch, and it is up to them to find their way out of it. Their attempts are of course hindered by people who are out for power. These people don’t use the nicest of methods to get to their goal, and the place where the final confrontation is played out is an amazing space where the beginning of the book never pointed to. If you like complex characters and a good steampunk read, the Source of Lightning is definitely for you.