Yes! Hilda is coming! Soon too!

No need to excuse my enthusiasm. Live with it or run away screaming. In the latter case please send me a recording of your screams as I collect interesting vocal expressions. 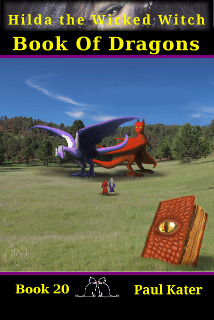 Tomorrow is the day! Hilda’s 20th adventure will hit the e-shelves! And it’s a book about a book! A book of Dragons! Real, live, big, dragony fly-beasts! If you want to know how to get one, buy the book and find out!

And what’s this adventurer stuff then?

That’s coming too, be it a little later. I hope by the end of November. I’m talking about the sequel to “Wanted: hero“. It will be called “Wanted: adventurer”. It was a really difficult book to write which threw surprise after surprise at me. All came out well in the end, despite a lot of dust, cracks and airborne problems. Maybe you remember Reny and Sebastian, also known as Sabas to throw the ugly Lergesh off his trail. There are more adventures (well, duh) lined up for them. And yes: there will be Nordrish too. 😀

The last bits of things: Nanowrimo!

Winter is coming to the north, as we all know (except for Jon Snow; he knows nothing). But November also means Nanowrimo. Despite the fact that I’m working on 2 Hilda books (one in edit and one in writing) I plan on starting another book about Hilda’s world. This one will be different though. You may remember Baba Yaga’s absence from her bestest girlfriend’s life. Well, this book is going to detail where she went and what happened during that time.

Until all that is done you can either read one of the many books all those writer types from around the world have created especially for you, or you can join the Night’s Watch and wait for the Army of the Dead to arrive. Up to you.

But whatever you choose to do: stay alive and enjoy it!