Hilda 19 is out since a while and you hear little from me. Part of that has to do with things in life. Things involving jobs, new jobs, other workplaces and so on. Those take up time and energy. Still I hope that someday I’ll be as good a writer as for instance Stephen King or Ursula Le Guin. That’s something for later, when I grow up. As I try to write this, my cat Grimalkin is walking over the keyboard, attracting attention.

So what’s happening in the area of real interest: books.

I’m working on book 20 of Hilda which is always a pleasure. Carol and I are still working on getting the sequel to “Wanted: hero” out there. The next book to come out will the “The Magic of the Bull”, which might be closer than you think. 🙂

In between all that I have also updated the cover for “Charisma, the young witch.” 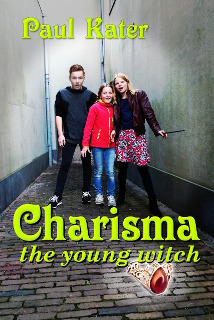 I think this looks a lot better than what was there before!