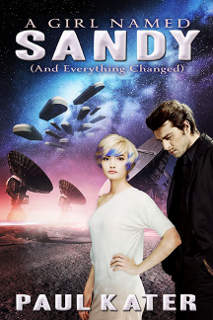 Long time ago, in March 2014, I published a book called “A girl named Sandy“. Until this day I still consider this one of my best books.

The story has an open ending. Somehow that just happened. Of course this begs for a sequel. A few people mentioned that to me also, which is understandable. Who doesn’t want to know what happens to Sandy and Paul after everything they went though?

At some point in 2015 I started writing a sequel. The start of that looked promising but the further the story progressed, the more I lost interest. It wasn’t what I was looking for. After a few more attempts to revive the story I thought, “Bugger this. This isn’t going to work.” And so I left the not even half complete manuscript lying around on a hard disk where it refused to collect dust. (This is because hard disks are made to be dust free.)

Now, fast forward from 2015 to the start of this week.

On the way to work (yes, your favourite author still has a daytime job to manage the bills and such) I sat thinking about a world that’s not just Science Fiction and not just Fantasy but an intriguing mix of the two.

Can you see it in your mind already? You can?? Let me see! Oh, right. That’s interesting enough but… 😉

Anyways, that idea popped back into my head when I was out doing some grocery shopping today (don’t ask me how my mind works, I don’t know either but it gets me through the days) and then I remember the dustless manuscript of the Sandy sequel. And a star was born! Or at least an idea. I shall retire the entire failed manuscript and start from scratch. (Hmm, suddenly one of my cats comes along for a scratch. Is she reading along here?)

So, to everyone who’s looking forward to a sequel to Sandy, there might actually be one someday. Don’t expect it to be out soon, though, Carol and I are still working on the sequel to “Wanted: hero” and there are some other things on the stove. (Why do I think of Hilda’s kitchen now?) But it’s definitely maybe going to happen!