Recently I read a post online that made me happy. The post dealt with things that are often seen as bad things in scifi and fantasy writing. One of the ‘bad’ things discussed was portals.

Why are portals considered bad? Probably because they are easy. Portals can just be there without any further explanation. No one knows how it got there, nor who built it. The fun is to figure out if it still works, how it works, and how to get yourself out of the mess once you went through it.

Why do certain critics insist that writers should come up with other, more credible bits of equipment to get their characters into trouble? It will only add to the size of the book because the whole thing needs to be explained, invented, put into place, made credible. All that will draw the attention away from the actual story.

Of course, at times coming up with a new way to go from one place to another can be bunches of fun, but then that whole experience should be part of the story.  No such thing needed with a portal. Bam. It’s there. We’re in trouble Now what?

Seriously, I love portals. I’ve used one in Francis and Frankie for instance. And the times that Hilda and William travelled from Fairyland to ours and back, for instance in The Wytches Roone, that didn’t happen because of well-defined physics and other particle storm entities. Portal. Get them there and make the story happen. The titles I mentioned up here were fantasy stories. My Scifi story “Wanted: hero” also uses a portal to get to another planet. No space ships, no FTL-drives (Faster Than Light, another thing mentioned on the article I referred to). Without portals many stories would not have happened, and I’m not just referring to my own stories here. 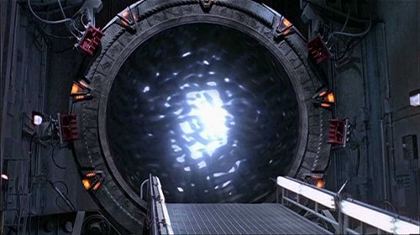 Do you remember the first Stargate film? What else is that star gate but a big, old portal? An entire network of them even!

As the series went on, the origin of the star gate was divulged, little by little. A great way to do this because it gave the people writing the series time to come up with credible parts to make this sound plausible. For me they did a great job with that.

(And since I’m a book lover: did you know that there are books published about the Stargate universe? Really! Follow the link and be surprised if you’re a fan and didn’t know about this yet!)

Gimme my portal and no one gets hurt.

Portals. I love them. Because they’re so convenient and versatile. How do you feel about portals in fiction (and film) to move to other places, other times, other worlds? Heck, maybe I’ll write a book called Portal World some day. I can see interesting things happening in such a place…