I am certain that many of you, who are Hilda fans or even Hildaholics, have by now read that infamous book about Hilda when she wasn’t yet the wicked witch she is now.

You may have seen that there are a number of references to older books and stories in book number 16. This was only partly my intention, but as the story grew I saw more and more opportunity to clarify how certain things had come to pass in Hilda’s life and history.

I have now taken it upon myself to outline the references to the older books as I did take notes on them. Are you ready for them? I am curious if you have found the same ones, and if you perhaps discovered something that I missed!

This one primarily goes to book 8, Dragon Master, where Hilda mentions her town of birth for the first time.

Another reference here would be book 11, Rock ‘n’ Troll which acts out almost entirely in Rompford. I still hope to see a Rompfordian football match…

I admit, this was quite an obvious reference, perhaps even so obvious you missed it. No worries though, there are many more to come.

In this chapter Hilda’s dad goes out to acquire some ‘special wood’. This of course is wood from the Squeamish which is brought to our attention in book 13, The House. This is actually something I thought of later, after having written that particular chapter already.

The house that Zoraia and Ludwig live in was a talking house – remember that it talked with Hilda on occasion? That suddenly reminded me there had to be a connection to Squeamish wood, so I had to send Ludwig out shopping for that particular kind of wood. Which he did. 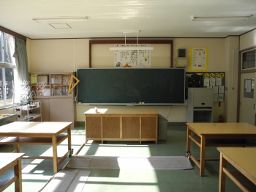 Here we have references to several books again. First of course there is book 7, Back to School.

But also book 10, Magic on the Rocks, is definitely meant to be referenced here. As you may remember, the school was quite an interesting place for Hilda and also Baba Yaga. I really enjoyed working out the classes, the other class mates and their quirks and habits, and the problems someone can have with flying a broom. 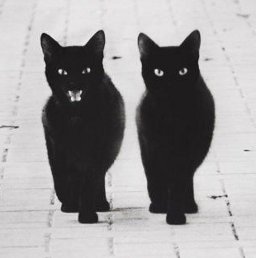 This was a tricky one to spot, I am sure. In chapter 4 Zoraia casts a spell onto two cats that were tormented by a few village boys and those cats disappeared – but where to? Well, they went to book 4 for starters, Hilda and Zelda. This is the first place where I originally made the two black cats appear, seemingly out of nowhere. Now, magical cats do wild things but they need to come from somewhere. Now you know where that somewhere was: the marketplace of Rompford, when Hilda was small. Another reference to the two cats was of course Hilda book 5: Cats. Now that was an easier one, wasn’t it?

But that’s not all for this chapter. In chapter 4 Hilda also learns that she’s ‘the older sister’ now and that she has to take care of her baby sister. Hidden in here is a reference to The House, again, where Hilda realises she has to do what her parents told her to do: take care of Charisma!

In chapter 6 of Hilda’s Younger Years Hilda sees the hut of Babs’s parents for the first time. A hut on legs. Where does this point at? Believe it or not, this goes to book 3, The Challenge, where William appears and faces Baba Yaga’s living environment for the first time. Another reference here is Phargene, book 14, where Hilda meets Baba Yaga’s parents, Papa Yaga and Mama Yaga. 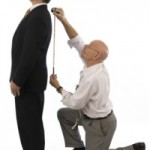 This chapter references the Zola family, the famous tailors who fell victim to burglary in Hilda’s adventure Rock ‘n’ Troll. Do you remember how Hilda and William went into the store of Gorgon Zola and his wife, for Hilda to order a new dress?

I had far too much fun with that tailor. I thought Zola was quite an interesting name as it’s not very common, and then I thought of the famous cheese, Gorgonzola, and now you know how the good clothes maker got his first name…

You have probably recognised Hepatia Strunk, the not so beloved head teacher at the Magic School. Here of course we have a reference to Back to School as well as Magic on the Rocks again. 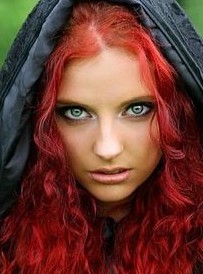 Yes, two references in this same chapter, and all to different books. In chapter 10 of the Younger Years Hilda meets Jenneal, the red-dressed, red-haired witch with a fox fixation.

This points us back to Rock ‘n’ Troll again where William and Hilda visit Jenneal and actually recruit her to battle the huge walking rock men that are threatening the village of Rompford.

Don’t worry, we’re getting to the end of the references. Somewhere… 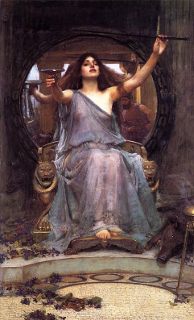 This is probably one of the very easy ones to spot. Hilda meets Circe for the first time in chapter 13.

Circe, the Greek Goddess who calls for Hilda’s help in Hilda – Aiaia.

It was very entertaining to bring Circe back into the story since Hilda told William about how she’d met Circe in school, how she’d been late for the start of the lessons, and the strange manner in which she’d seen Circe’s parents back then.

In this chapter Hilda gets fished out of the water. That was a very terrifying experience for her as you can imagine. The reference here, believe it or not, is Phargene. Can you spot why? Think back to the story and the flooding tunnels where witch and wizard are trying to shut the valves… 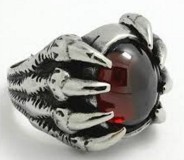 This is a feeble reference, I’ll admit that. The ring that Hilda gets from Circe, the dachtilìdi. It’s a bit of a pointer to Charisma, the young witch, who steals that very same ring from her older sister and has adventures with her friends.

Who doesn’t remember the scene in Hilda 2, Snow White revisited, where Hilda and Babs are performing their magical arts at the witches meeting on Scary Mountain?

Reference number 14. Chapter 25. Back to School.

Really, they don’t come easier than this one. The title of the chapter is the same as that of book 7. Back to School, so let’s immediately roll on to

reference number 14. Chapter 25 again. A hut in the water.

Here is a nice reference to Rock ‘n’ Troll again, to the time when Hilda and Jenneal remember the time that the hut of Baba Yaga’s parents had walked into the river. 🙂 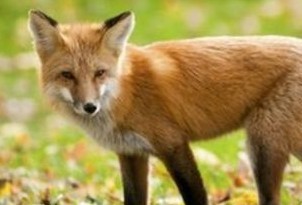 The last one. You must be relieved. In this chapter Jenneal has her affair with the fox and the hunters. Yes, we’re once again back at Rock ‘n’ Troll.

Well, that was it for Hilda’s Younger Years. Did you recall or remember the events I described? If so, I hope you had fun travelling through Hilda’s history with me. If not I suggest you go back to book 1 and start reading again.

Have a wonderful day, from Paul, Hilda, William, and the cats. And the rest of the crew!