Christine is one of the precious romance writers who live at the Alexandria Publishing Group. I asked how what drove her to writing her first book, and the answer was quite a surprise! Her first romance novel is called “Cheating to Survive“. It’s not your typical contemporary romance novel. There are no billionaires, no heaving bosoms and also no women wanting to end it all because their husbands dumped them for their twenty-year-old secretary. 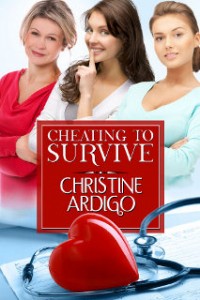 Cheating to Survive puts the women in power:

What happens when three co-workers decide to cheat on their husbands? Will they find happiness, or will they be destroyed by the consequences?

I came up with the idea one summer, after driving my two daughters to camp every morning. The 30-minute commute at 7:30am, with two exhausted, cranky girls in tow left us with a lot of radio listening. Unfortunately, my then fourteen and nine year old took an interest in shows like “To Catch a Cheater” or “War of the Roses,” where listeners called in to catch their significant other in the act of cheating.

As much as I hated listening to it, I took it as an opportunity to teach them both a lesson in love and relationships. What I noticed about the majority of these calls, was that most of the callers were women. Pathetic women who’s boyfriends/husbands were not only cheating on them, but the men were arrogant about it. Some laughing when they got caught.

What was worse, once they caught the men red-handed, some of them went as low as to insult the women, tell them it was their fault, said “too bad deal with it” and a host of other derogatory statements. The worst part, after the women were humiliated on public radio, some of them begged their men to take them back or cried because they still loved them! And the men laughed harder.

I discussed each show with my daughters daily, but the images stuck with me. Hence, the creation of Cheating to Survive. Let’s turn the tables. Let’s have the women cheat on the men this time. Let them enjoy it. Fully. Let them skip down the halls, dance in the middle of the cafeteria, laugh behind their husbands’ backs.

But of course, in life, nothing is that seamless.

Meet Victoria…Heather…and Catherine, three dietitians working in the same hospital for a horrendous boss, and married to husbands anyone would want to strangle, dump in the trash, and watch the garbage truck pulverize along with the maggots.

Will the three of them be triumphant with their scheming, or are they headed down a wrong way path?

The outcomes could be worse than they imagined.

Well, there you have it. Are you curious about the book already? If so, you can head over to Amazon.com and have a closer look at the book. Who knows, you might love it.

One thought on “My first book. Christine Ardigo.”