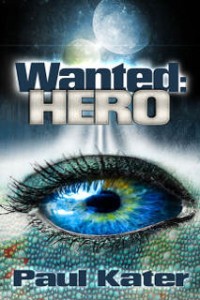 Welcome again. Last week I introduced to you the cover of my new book, Wanted: hero.

Today it’s time to let you read the first chapter of the novel.

Click the link to read more whenever you’re ready…

The ominous sound of the mail that hit the ground in the hall yanked Sebastian from his book. The flap over the mail slit seemed to make more noise every day, as if the mailman had some mean streak in him. What misery would there be waiting for him this time? Was he going to be thrown out of his house today? More bills? Maybe even another letter from his ex-wife’s lawyer who wanted to see more money for her.

Sebastian closed his eyes, took a deep breath and was back inside his book, with the story he enjoyed so much. Not now, world, not now. First there was a princess to be rescued by a dragon rider and that was more important than a bill or court order. Unfortunately the princess was saved very quickly and the end of the book wasn’t so brilliant. Sebastian closed the book with a snap and while uttering a sigh he put it on the wobbly table next to his slightly worn but ever so comfortable chair. Then he went to fetch the mail. The inevitable had its name for a reason. In the draughty hall he checked the envelopes. Tax Office. Always a welcome change. The envelope fell to the ground. Lawyer. How could he have guessed that! Advertising. As if he still had any money to spend on things like that. “Well, that wasn’t too bad,” Sebastian told himself as he returned to his chair. “They could have fired me with a telegram.”

Before he had opened the next book, a loud bang ripped him from his pondering. That had to be the window of the guest room. He hoisted himself up and went up the stairs as the wind howled around the house. The noise came from the guest room indeed. The hard wind gave him quite a fight to get the window closed, and when he’d finally managed it Sebastian was ready for dry clothes; the storm outside had used the pouring rain to drench him. “Marvellous,” he muttered as he saw the puddle on the floor. Half an hour later that was cleaned up and then he thought it enough for the night. He went to bed. After reading for half an hour more he fell asleep to prepare for tomorrow’s new day.

“Oh, are we in such a mood? Then you go get your own coffee.” Cornelius looked annoyed for a while but that never lasted long with him. “How come you’re actually on time today?”

“Wind and rain at my back, that’s a big help,” Sebastian explained as he took off the wet rain gear he’d worn on his bike. He had sold the car a long time ago because of all the “cuts” in his life, but this way he had a good way to stay fit. “I’ll get the coffee. Regular for you?”

“Yes. Double sugar and extra brandy.” Cornelius patted a big folder. “I’m going to need that today.” When Sebastian returned with the coffee, Cornelius was already tapping away furiously at his computer. “Any news of your stripper?”

“Do you have more than one? I’m referring to your ex, the bitch that’s stripping you clean. Did she buy a new horse from your alimony by now?”

“For god’s sake, don’t mention her. I had another envelope. And taxes. I wish they would hand back what I’m running short every week.” Sebastian’s ex had been crazy with horse riding, everyone at work knew that. Together they’d taken some lessons and that had been great fun, until suddenly serious fights had flushed their fun down the drain. She started to blame him that his career wasn’t on the level that she wanted it to be, and after that there suddenly was a lot of misery in the form of a divorce that she had started without much discussion. The whole thing had shocked and surprised him, and he had simply signed the papers because he’d been sick and tired of the fighting and yelling. Talking was no longer an option, there was nothing they could nor wanted to save any more. Especially the last six months had taken their toll on Sebastian, and the prospects were like the autumn weather: grey and sombre.

“I know what you mean,” said Cornelius, “I’m looking for a sponsor as well.”

“A sponsor for what?” Frank Jones, a colleague who shared the office, had only caught the last sentence. As he passed behind Sebastian’s chair Frank grabbed Sebastian by the arms and tried to keep him pinned into the chair. Sebastian reacted immediately: he used one leg to push himself away from the desk. That threw Frank off balance and against the wall which he now was effectively pinned against. Sebastian slipped off the chair, pushed that aside and took Frank in an arm-lock.

“You just have to keep trying, don’t you?” Sebastian grinned as he applied a little more pressure to Frank who had to kneel down. “Three weeks of taekwondo is not the same as six years of Budo training, Frankie.” Then he helped his colleague to his feet again. “And you have to get your own coffee.”

“Damn it, Sebastian, one day you’ll accidentally kill me!” Frank was very shocked by this sudden rough action.

Sebastian sat down again. “Don’t worry, boy, things like that won’t happen by accident. It’s been a while since I had lessons, but I still train by myself regularly.”

“I can tell,” said Frank who stood rubbing his shoulder. “Can’t you teach me some of those tricks?”

“I can do that, but since I’m not a sensei, a teacher, I won’t do that.” Sebastian shook his head. He hoped that Frank had learnt his lesson now. He didn’t want to hurt the young man but ever since Frank had taken up his taekwondo lessons he’d become intolerable.

The day crawled by. One annoying job wasn’t done or another department started complaining about his latest reports. As a business consultant he wasn’t the most popular person, and when he brought up evident mistakes here and there, people tended to turn those into personal dramas. A few times Sebastian used his internet banking to check what he still had in the bank. That wasn’t something to cheer a person up but he wanted to keep an eye on the situation. His ex’s lawyer had somehow managed to trick Sebastian into signing a paper that the lawyer could transfer the alimony money from his account. The sum was entirely over the top, and today was the day to wave goodbye to his money again. He’d tried to get out of this wrong deal, but he had signed the papers and thus he didn’t have a leg to stand on. At least he still had the house. Okay, it was an old place he rented but it kept the autumn storm at bay. Sebastian could at least barely live, even if the situation was difficult.

“What do you mean again? That’s the normal state of things for me these days.”

“You should get yourself a lawyer and sue the crap out of your ex.”

“Cornelia, do you have any idea how much that costs?”

“There is an insurance for that, boy, it works miracles.”

Sebastian laughed. “And how should I pay that?” He pointed at the monitor. “No insurance will fall for that.”

“Perhaps you should sell the boat then,” Cornelius suggested. “Boats are no good in this bad weather anyway.”

“If only I had a boat to sell.” Sebastian had never owned a boat as his ex had already claimed to be sea-sick if he moved a glass of water too quickly. The thought of his ex made him feel sea-sick at the moment. Quickly he closed the banking website when Frank came back into the office. Frank was far less understanding towards Sebastian’s situation. At home Sebastian no longer had an Internet connection as he simply couldn’t afford that any more. That was why he had to do his sparse online affairs here at work. Luckily that wasn’t a problem here, but Frank still nagged about that and Sebastian was not in the mood for that.

Towards the end of the work day Frank was the first one to leave. “Fighting lesson,” he said with a look that was supposed to convey readiness for battle. He took care to keep a safe distance to Sebastian. “Tomorrow I’m going to tie everyone in a knot. See ya!”

Sebastian shook his head. “He’s not going to last long. Oh, you’re leaving too?” Cornelius also had his coat on already.

“Yes. Groceries and such.” The man regarded Sebastian. “Is there anything I can bring for you, Sebastian?”

From the chair in which he planned to do some overtime Sebastian looked at his colleague. The man offered this regularly. “That would be great, Cornelius.”

“I’ll be fine. Don’t get wet,” Sebastian laughed. “And thank you.” This confrontation with his current state of life made him feel bad again.

It was already past seven when the guard came walking through the offices. “Mr Fowler, sir, you really need to leave now. We’re switching on the alarm soon.” Sebastian thanked the man. He always gave Sebastian a little extra time to work. Quickly he put on his rain gear and left the building. Fortunately the storm had become less strong, but that didn’t hinder the rain from coming down with vigour.

Back home again Sebastian made something simple for dinner. What a difference compared to the wonderful meals of days gone by, he thought as he sat at the kitchen table with his plate. In the past, when things between Madelon and him had still been great, when they’d made plans for a house in the country. When they had taken his parents for little trips, or when her parents invited them for crazy parties.

The rain lashed the windows and that made him feel very down. All the plans they had made, all those dreams… everything down the drain in one fell stroke when someone else had gotten that promotion. Madelon had blamed him personally for that, as if he’d planned that. After that first fight she’d run out and spent the night with her parents. Shaking his head Sebastian stabbed his food that had gone cold. He glanced at the microwave. Heat it up? Immediately he considered the electricity bill, but on the other hand he had to eat well to stay healthy, so heating up the food it was.

After dinner and washing the dishes he moved to his chair again and buried himself in one of the many books he still had. Madelon had never liked reading, she had always watched television. At least that was a good thing of the divorce: he no longer had to listen to those endless stories about fake celebrities and plastic heroes.