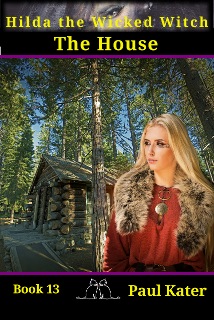 Welcome to another first chapter. The first chapter of the latest book in the series of Hilda the Wicked Witch: The House.

The House will be available next week!

“Stop pacing, witch. You being nervous makes me nervous.”

Hilda looked at her wizard. “William. Listen. This is my house, and I will pace as much as I like.”

“Can you pick another part of the floor then? The boards you are walking on are squeaky and get on my nerves.” The house had to get in on the conversation, and at this point it even had a valid reason.

“Shut up, house,” two voices said. Hilda frowned as she looked at the wood beneath her feet. “Do they really squeak?”

“They do,” William agreed with the house.

Hilda slowly walked another round as she paid attention to the floor boards. Queeeeek, one of them complained. “Oh. They do.” The witch sighed as she popped up her wand. “We’ll fix that, right now.” She threw a spell onto the floor and tried the board again. Queeeek. “This is not my day, is it?” she asked William.

“It’s fine now,” he answered. “You used an English spell.”

“I did?” Hilda shook her head and pushed a foot on the floor again. By then the English spell had taken hold. “I did, yes, I did. Someone should fix the English language,” she then declared, and resumed her pacing.

“Not more of that,” the house lamented, but its words remained unnoticed.

William looked up at the two cats who had found refuge from Hilda’s pacing. They were in their favourite spot, among the big, old books on magic and herbs, on the top shelf against one of the walls, and that location meant they weren’t going to lift a claw to help William.

“Can you go outside to check for message arrows?” Hilda then asked.

William lifted four arrows from the table. “One of these came in not very long ago. I am sure there is no new arrow yet.”

“There is no new arrow,” the house confirmed.

“Maybe you should check just in case. No, I’ll do it myself.” Hilda walked out the door that opened by itself. The house knew how to act in times like this. The witch returned immediately. “No arrows. Crappedy crap. Do you think they forgot about us?” Twok. The sound barely made it into the living room of the magical house, meaning that an archer had hit the large pole, instead of the house itself. Hilda was outside before William could get up from his chair. “Crappedy crappedy crap!” That was William’s cue to sit down again. Hilda in that mood wasn’t good. The witch came in with a broken arrow and a scrap of paper. “They cancelled!” She threw the arrow-parts and the note on the table. “How dare they!”

William picked up the note. Repairing the arrow would only mean the witch would break it again. From the note he learnt that King Walt and Queen Velma were very sorry to inform the recipient of the arrow that the party to honour the arrival of Snow White’s father in law was cancelled as the man had fallen sick. “How dare he, you mean,” William remarked. “The visitor didn’t come.”

“That’s no reason to cancel a party, William. I have this beautiful, new dress that was made for me in Rompford and I want to wear it to a proper occasion.”

Twok. Through the open door the sound of this arrow was quite clear. “I’ll get this one,” William announced. When he returned he shrugged and put the arrow down.

William recited: “P.S. we hope you’re not too disappointed.“

“You shouldn’t have told me that.”

“Then you shouldn’t have asked me.”

“But then I’d have read the note myself and not have a reason to pick on you for it, wizard,” Hilda employed her irrefutable logic. Twok. “Do they keep at it today?” Hilda wondered as she walked out for the next message. “You won’t believe this one, William. P.P.S. If you still want to come over, we have all this food waiting.”

“I suggest we go over there and help them get rid of the food, don’t you agree?”

Hilda looked serious. “You have a heart of gold, wizard, always willing to help. Yes, let’s go there. But for just food I’m not going to dress up.” Thus the magicals left the cats in the care of the house and set their broomsticks towards the castle of the king and his queen. The trip was quick and as they approached the castle, the smell of food filled their noses. Usually this meant a good thing, but it seemed that the people in the kitchen had prepared everything at the same time, so the assault from different dishes on their sense of smell caused the magicals to resort to holding their noses, which was an old but certified way of dealing with such occasions. Offended by such a welcome, Hilda and William didn’t bother flying past the guards (who also held their noses) but went over the castle wall and quickly entered the grand hall of the castle. That space was still dressed up for the royal guest. “At least they made it pretty for us,” Hilda nodded, slowly testing the air and then releasing her nose. “It’s safe here, William.”

The grand hall, usually bustling with life, was eerily deserted except for the flower arrangements. Hilda looked around. William did so too. Together they found the old, dented suit of armour in its corner. “At least they tried to polish that,” Hilda remarked. Then she raised her voice a little. “Hello! Anyone here still alive?!”

One member of the castle staff, a round man, came quickly shuffling into the hall. “Honourable witch, wizard! Welcome! Please, please, come with me, we have an emergency!”

“Sounds like we’re in time for the fun. Lead on,” Hilda grinned.

The emergency was different than they could have expected. It began and ended in the royal kitchen, where food had started multiplying in gross amounts. Cakes and pies squished through the door together with streams of soup, while fried chicken floated along in the latter. Within moments the magicals stood up to their knees in free-flowing edibles.

“Crappedy crap, who sucked the wrong elf here?” Hilda wondered while she wished she had her broom with her. Unfortunately there were several closed doors between her and it, so summoning it would be lethal for the broom. “How did this happen?” In a combined effort with William and their wands she manipulated the flow of food to go around them. It felt a lot better not having hot soup against her shins.

The round man stammered confused words until Hilda threatened to turn him into a sack of turnips. “There was a man here offering to help with the cooking and he seemed very good at it. Helpful man, and good ideas about spices and herbs, you should know. The things he suggested with pepper and cinnamon were-“

“Enough of that blabber. What happened?” Hilda wasn’t interested in spices while the kitchen vomited more and more food into the room where they stood. The stream had crawled up so high that it started pouring out of the open windows.

“I don’t know,” the round man confessed. “Everything was going well while we waited for the other royal highness to arrive when we heard that he wasn’t coming. And then the other fellow became a bit annoyed or so and said he’d had enough of all this, so he said goodbye and something else, and this started shortly after he’d left.”

“What was the something else he said?” William wondered.

“I don’t know. It was in a strange language. I’m a cook, not an expert in foreign things – unless they’re vegetables or spices.”

Hilda turned to the kitchen and cast a freezing-spell into it. Hopefully that would stop the food going crazier than it already was. After a solid “Immobilis!” the flow decided to give in.

“What did the something else sound like?” William asked the cook.

“That’s a big help,” Hilda muttered. “Well, looks like it stopped. This is the strangest way I’ve ever encountered where you could eat from the floor. There’s plenty there.” The cook was extremely grateful though. He guided them back to the grand hall, sloshing through pudding and slipping on sardines that lay in hiding beneath the custard. Once outside the kitchen, the cook begged them to wait while he prepared a basket with food for them, to take home. During the wait, William wondered in what other ways Hilda had seen places where one could eat from the floor. With a witch like her anything was possible, so he asked her about it. “Oh, you know, a witch gets around and sees things,” Hilda shrugged, leaving the real answer shrouded in mystery the way she did quite often.

The cook came back with the basket. The magicals asked him where they could find the king and queen. After all, it was their invitation that had brought them here, so they should at least say hello. “The guard at the gate will probably know,” the cook said, “I’m here for cooking food, not for king-and-queen-sitting.” He had a good point, so Hilda and William set off to locate the royal highnesses.

The king and his queen had retreated to one of the gardens far from their home. As Hilda located the two, she understood why they had chosen that spot: the intense smell of food was not so bad here thanks to the scent of the many flowers. “Hello, your kinglinesses,” the witch greeted the two.

“Hilda, William, such a nice surprise. What’s in that basket?”

“Please don’t open it then!” the queen exclaimed, “we’ve seen enough food for the rest of the week!”

“I understand your inedible sentiments. Someone’s been playing magic in your kitchen,” the wicked witch explained. “We stopped the growth of it, so that’s done. The cook will find a few people to help clear it all out.”

King Walt sighed. “I’m rather sorry that the invitation to dinner turned out a bit overwhelming. Maybe another time. Next year or so. And I’d appreciate it if you could interview everyone in the kitchen beforehand.”

“Would you happen to know who is responsible for all that?” William asked.

“Now really, wizard. We’re concerned with what comes out of the kitchen, not what goes on in there,” the queen responded.

“You should think about changing that attitude,” William suggested. Hilda agreed with that and was pleased that William made the remark; through the years she had stepped on royal toes a little too often already.

The queen scowled at the wizard. Then she seemed to recall that he was in fact a wizard and smiled again. “We will think about that.”

“We should go home, wizard, as dinner’s cancelled.” Hilda made her broom hover and sat on it. William followed her example, and after a goodbye to the royals, they flew off.

“I wonder if there’s anything in that basket for the cats,” Hilda said as they saw their home in the distance.