As I was putting together this remarkable collection of alphabetical posts, it suddenly struck me that there are many ships in my books and stories. 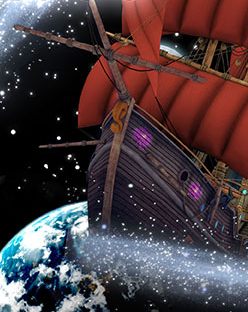 That’s odd because I’m not a sailor, nor is there anyone in my family who’s in that trade (as far as I know at least).  The first ship I consciously incorporated in a book was the Mimosa, appearing in the 6th Hilda the Wicked Witch book. Of course, coming from a fantasy / SciFi writer this was no ordinary ship as it travels through space and time. On its own accord. This is not a guided vehicle like the Tardis of Dr. Who.

The second ship I created was called the Pricosine. A wooden sailing ship resembling an ancient clipper, with many masts and sails, sailing on the distant planet called NGC6637-VIII. This all sounds like science fiction which in part is true. The story (Bactine) however is in majority a steampunk story, but somehow I fell into a science fiction start for that.

After that I had to do something about the requests from fans of the Hilda stories regarding the 6th book. They wanted to know where the Mimosa came from. This resulted in a hilarious book called The Story of the Mimosa, in which you can learn of the earliest beginnings (which literally start with the stacks of wood that it will be built from) and then the travels of the wonderful ship Mimosa and it’s strange and wonderful crews that find and lose it. The Mimosa will always have a special place in my heart because the folk band Harmony Glen, who are dear friends of mine, appear in the book, and in turn they named the ship in their theatre show “The Mimosa”.