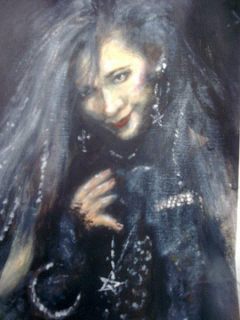 Welcome to the teaser of the month  – the first chapter of the new Hilda the Wicked Witch book.

Allow me to welcome you to the chapter called

“I told you, William, this would be an ordinary day.” The witch landed her broom near the house and waited for her wizard to touch down as well. “Nothing special or exciting, no ghosts, no lost princes, no princess that turns into a frog when you kiss her-“

“And I still find that intolerable,” William interrupted her. “These things are supposed to be frogs that turn into princes.”

“And you know that for sure? How many frogs have you kissed, wizard?”

William grimaced at the thought. “One less than I kissed princesses.”

Hilda grinned. “But that was Snow-White. That doesn’t count because she kissed you and it was only on the cheek.”

“No one ever kisses me.”

The magical couple and also the two cats they had with them turned to the house. “How surprising,” Hilda commented. “You complain about everything, even if you were kissed.”

“And you know that for sure?” the house asked, doing an awful imitation of Hilda’s voice.

“Yes. And I’m not going to debate this with my own house,” the witch said. She grabbed her hovering broom and walked in. William followed her and as he came in he grinned and kissed the door.

“You should have shaved,” the house complained.

“See?” Hilda said without stopping to turn as she knew what William had done. “I wouldn’t complain about that.”

“Of course not. You’d simply take care of the problem with magic,” the house commented as she walked along, “and that is a commodity houses lack.”

“Guess what I’m grateful for!” Hilda grinned as she breezed past the mirror. She quickly made sure her hair was in the proper state of disarray, the way it was supposed to be, and then she went into the kitchen to make tea.

William started to feed the cats and was treated to a few glances of displeasure as the cats were more in a fish-mood than the chicken he handed them, but the wizard carried on. So did the felines. From the kitchen came sounds of things falling. “Need a wand?” he offered, but Hilda said that everything was under control.

By the time she came in with the tea-tray floating in front of her, the wizard had found a spot near the window and peered outside. “Problems?”

“Oh. Too bad,” the witch said. “Ordinary days are fun at times, but they shouldn’t last a whole day.” She poured the tea and nodded in appreciation as William turned hers into coffee, almost without thought.

“It’s strange to see no arrows in the pole,” the wizard said as he looked at his tea. “As if the world doesn’t need us.”

Hilda sipped her black brew and then stated that the man needn’t worry about that. “If ordinary goes on for too long, we’ll simply fix that.”

William looked at her over the rim of his teacup. “I am convinced that you know a dozen ways to fix ordinary.”

“A dozen? When did you start underestimating me?” Mischief blinked in her eyes as they grinned at each other. The moment was interrupted by a heavy knock on the door. “House, who’s there?”

“A big man. He has a horse-drawn wagon with him.”

Curious why a big man with a horse and wagon would call at the house Hilda got up and opened the door. “Who are you and what do you want?” She tilted her head upwards until she located the man’s face.

The big man looked down at the witch. “Are you Grimhilda the Witch?”

The big head nodded. “Just making sure I’m at the right place, honourable Witch. The community is sending you a wagonload of food, compliments of King Walt, for everything you’ve done.”

At least now she knew what the man was doing here. “William, can you open the hatch to the storage-room below? This gentleman is bringing food!”

William, still at the table, shrugged and snipped his fingers. The hatch at the other side of the house opened. “Done!”

Hilda looked up at the man. “You heard him. The hatch is open. It’s round the back.”

The big man who still hadn’t said his name nodded. “Thank you. We’ll get to work.”

“We?” Hilda wondered as she only saw the one big guy.

“My partner is still on the wagon over there,” the man said with somewhat of a waving gesture into a fuzzy distance. “It’ll be all fine and done quickly, honourable witch.” He nodded again, turned and walked off into the same fuzzy distance as his wave had gone.

Hilda closed the door. “That’s more like it, and thank you for opening the hatch. That’s not a witch’s job when there’s a wizard around.”

William didn’t even frown at her remark. She was, after all, Hilda. As she sat down and had another cup of transformed coffee, the house announced that two men were indeed at the hatch behind the house. “One of them, the big one, is going into the storage now.”

“He has his arms full of food-things,” the house reported. “He is taking them to the cart and is now returning to the hatch.”

“That’s good, very – crappedy crap!” Hilda jumped from her chair as she dropped her coffee (which was expertly caught by William before causing stains), summoned her broom on the way to the door, and was airborne after a single step outside. She raced over the house and dove towards the big man who was just returning from the cellar with another armload of groceries. This time he was the one looking up and the witch was looking down over the tip of her wand. “Put that down. Carefully.”

Trying to be clever, the man just dropped everything and made a run for the wagon that was not far away. Hilda caught the goods, eased them to the ground and then applied some magic to the horse whose hooves then hovered an inch above the path it was standing on. Perhaps needless to say that all attempts of the small man holding the reins to get the animal in motion were in vain. The horse tried to leave but stopped as it noticed a lack of movement.

“You boys are going about this all wrong,” Hilda declared as she saw William and the cats come walking around the house. “Lesson one: never underestimate a witch.” A bolt of magic made the big man tumble into the back of the wagon. “Lesson two: never underestimate a wizard.” More magic made the little man fly up from his seat and land on top of his partner. “Lesson three: mess with magicals again and you’ll hurt even more.” As the witch kept the two under a spell, William took stock of their cellar and then collected from the wagon what the two had taken away. There was still plenty left, so the two had probably robbed others as well.

“Where did you get the rest from?” asked William, who had reached the same conclusion.

“That’s our business and none of yours,” the little man growled as he tried to get back on the driver’s seat. Hilda’s magic threw him back on his partner in crime though.

“Wrong answer,” said the witch, “when you mess with us, your business becomes our business.”

The big man tried to throw his little buddy but was rewarded with an even fiercer rebound, making both of them yelp.

“You can try that again but let me tell you that we can keep this up longer than you,” William warned the two.

“I’m not sure I want to though,” Hilda added, “this gets boring so quickly. Just tell us where you got the rest from, we’ll help you get it back there, and then we’ll deal with you.”

The two men weren’t much help, probably because of the second part of the proposal. They stopped their struggles, but that was also the only thing they did. Hilda shook her head at such stubbornness. “Then we just have to resort to the last one who knows where you’ve been.”

“We work alone, there is no one else,” the small man decided to share.

“Wrong,” Hilda told him as she walked up to the horse and lowered it to the ground again. “This fellow was there as well.”

“Very perceptive,” William nodded in mock appreciation. “So Hilda, do we take these gentlemen with us or should we leave them here?”

“Considering their current attitude we should leave them here,” Hilda agreed. “Otherwise they will be nothing but trouble.”

William went into their cellar and returned with a few ropes. Some magical work later the two food-thieves were properly tied up and hung from the branches of one of the sturdier trees near the house.

“Fine job, wizard. Now we’ll go round with the cart and give people their things back. House, if you care to lecture these people on where they went wrong, feel free, but wait at least one minute.”

“My pleasure. But why wait one minute?” The house sounded surprised for the first time since William knew it.

“That gives us time to get out of earshot,” Hilda grinned.

When they returned, the wagon was empty. Obsi and Grim sat in the empty loading space, content for having watched over their humans as they did a good thing, and wishing the surface would stop shaking soon. As William halted the horse, the cats jumped to the ground and ran to the house which opened the door for them. Hilda left William in charge of looking after the horse, and the witch herself wandered over to the dangling duo.

“I see you’re still here,” she began. It triggered a barrage of words from the two men that would fit nicely in a bar just before the fight. The witch listened for a while, hoping she would pick up something new. Unfortunately there was nothing to be gained from these two, so she silenced them and told them that the goods were back with their owners. “The owner of the horse and wagon let us use them to get back home, he’ll come by later to collect his property. Now I wonder what to do with you. Either we can punish you, or we can keep you safe until the others come and have them deal with you. What would be your choice?” After a prolonged silence she remembered to let the men speak again, which resulted in another stream of insults, threats and profanities.

“Boys, listen. Your words don’t impress me. Your actions didn’t impress me. In total you are quite unimpressive for magicals,” Hilda said as she shut the two up again. “I’ll leave you here for the others. I’m glad you made this choice so easy.” With that she turned and walked back to the house.