It is Monday again and it’s the last one for the year. This year’s last Indie Promotion is: 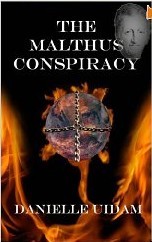 Ebook Short Description: In 2011 the world population hit seven billion. Fourteen thousand babies are born every hour. By 2045 the population is predicted to hit nine billion. Can our planet cope?

In 1798 Economist Reverend Thomas Malthus thought not. His work ‘An Essay on the Principal of Population’ predicted that population growth would outpace our ability to obtain resources, resulting in a global epidemic of famine that would destroy society unless curbed.

Fast forward to 2012. College students Dean Adams and his best friend Felix Pye, unwittingly stumble across the greatest conspiracy in history, and by doing so sign a death warrant. They are forced to run as powerful, high society members of a 200 year old secret Malthusian League attempt to silence them.

The league will stop at nothing to continue its Malthusian cause. Their purpose? To curb population growth and ensure Malthus’ predictions for economic ruin do not come true.

With the aide of detective Isabella Mercena, Dean and Felix go head to head against the evil forces as they attempt to expose the league’s sinister plans to control population. Will they survive to tell the tale and tell it before the next wave of disaster is unleashed on mankind?