As is usual for me, here is the first chapter, in full, of my about to be released release, The Story of the Mimosa. 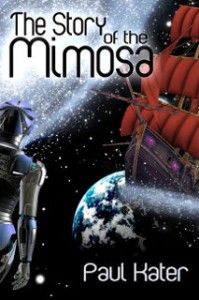 “Budak lap lop nignap sok yep?” (So what are you going to do with all that black wood you have recently purchased from the man whose only claim to fame is that he rips everyone off?) The nine foot tall, broad-chested man turned to the somewhat less broad-chested but half a foot taller specimen of his race next to him, who proudly inspected the load of wooden beams that had just been delivered to his yard.

“Bibip wop lop daap. Gim sallo wadda yem.” (You know I have this plan to build a ship, and finally I have the proper wood to build a sturdy and good one.)

“Wop lop daap sok flap? Skippip!” (You seriously plan to build a ship from black wood? You’ll have a black ship! You must be out of your freaking mind!)

The two discussed the taller man’s plan a bit more as they walked around the considerable amount of wood. The smaller one, Jarm, declared his friend insane. “You’ll be the laughing stock of the fleet, you know that. No one wants a black ship. Do you have any common sense left, Kray? You can hardly see a black ship when it’s in space! Space is black too!”

Kray shrugged. “The wood is good and it was cheap. I can add a bunch of lights to make it clearly visible.”

“Still I think you consider this too lightly, my kikowapolorofan.” (Friend.) Jarm shook his head, his wild manes jumping around while the metal beads in them clanged together. “But I have promised to help you with this thing and so I shall.” He held out one of his hands. Kray took and shook it.

“Thank you, Jarm. I am convinced this ship will be a big success and bring us a good price once it is built.”

“Let’s first focus on that thing. The building. Do you have a design for the ship already?”

As the two men walked off, Kray started talking about the plans he already had at his house…

It was nearly dark when a big Dragooner class heavy-cargo pick-up ship floated into view of anyone that was still at the wood-yard. This meant that no one saw it, which was exactly the intention of the people on the Dragooner. Several men dropped down lines and used those to slide to the ground. Once there they gestured up to their shipmates who looked down through their trinoculars (binoculars for species with three eyes) to get the Dragooner in position. The men on the ground and those on board the pick-up ship were very experienced, so within an hour the entire load of black wood was lifted up, stowed inside the enormous ship and the ground crew was hoisted up again as they held on to the lines that they had descended on.

The women that were part of the group of lads ignored the lack of mention of their gender. They had gotten used to it. For some weird reason it was, they knew, difficult for people not of their race to tell the difference between their women and their men. The ground crew was dismissed as the captain barked his orders to the navigator and the helmsman, to take the Dragooner out of the area. “After all, we don’t know when these people come back, and this compound is equipped with nasty cannons and other things to bring down ships even bigger than this one.”

Stately and without being hindered by anything the ship of the wood-thieves sailed away, seen only by creatures who could not care less about what happened there. Ships like those usually meant bad news for anyone a bit too nosey.

The captain rubbed several of his hands, pleased that this assignment had gone so well. He’d seen many a job that had gone wrong because of bad information from the people that employed him and his ship. This one would make a nice profit as he intended to make the robbery sound a lot more difficult than it had been. A few of the crew had already prepared video-reels with heavy fighting and cannon fire as proof. During a stop somewhere over deserted land, a bunch of crewmen would paint the actual damage onto the hull, so the customer could verify that the ship had indeed taken fire. The ship would not land and was quite dirty so images like that looked convincing quite quickly.

The journey to where the black wood had to be delivered went fast, the paint job was done equally fast (experience made this very easy), and the captain was soon on the ground, haggling with his customer about the wood and the allegedly sustained damage, squeezing as many credits from the man as he could without becoming physical. After the credits had been transferred and approved by several official banking committees (which took a while, never to the pleasure of the captain), the wood was unloaded in the place where the new owner of the cargo intended to build a ship from it.

Soon the captain was aboard the Dragooner, and the impressive pirates’ vessel was on its way to clean off the painted damage and after that locate a new customer that was looking for the specific services the captain and his crew offered.

The new owner of the black wood, Blokman Rufer, was satisfied about the transaction. Not only had he gotten rid of a lot of credits that he had acquired in dubious arrangements, the wood was also exactly the proper shade of black that he had hoped for.

His master shipbuilder came by the next day and rubbed several of his stubbly chins. “Looks good to me. Can make a nice lil’ ship, sir. Want us to start today?”

Blokman held back a sigh. “That would be good, yes. Although starting yesterday would be better.”

The master shipbuilder frowned and slowly nodded. “Not sure about that, but I’ll see what I can do for you, sir.” As he slouched off, Blokman shook his head. The shipbuilder was good at building ships, but the rest of him carried the air of being utterly useless. Despite all that, the shipbuilder arrived in the afternoon with his crew, flying along in five beautiful and spotless transport-shuttles designed for wood-moving. The black wood was loaded and then transported to the mill where the beams were sorted, cleaned, weighed, sorted again, cut, cleaned once more and in the end sorted for the last time, after which they were counted.

“The whole load is according to specs,” the owner of the mill assured the master shipbuilder. “We made it the way we did the last nine, so you can have your people quickly stick it together, and then sit on it for a month so you can charge a bit more before you deliver it.”

The shipbuilder nodded, not certain if a few more credits was worth camping out on a new ship for a month. “It’ll be fine,” he said as he approved the payment for the miller’s work. All the wooden parts were loaded in the transport shuttles again and moved to the actual building site close to the water.

The men he employed were lounging around until all the wood was off-loaded. Then two of them pulled up a small console, punched a few buttons and waited for the machinery to collect and sort all the wooden parts. Slowly the stacks of wood were picked up and taken away in metal arms and hands, and four hours later the ship was taking shape.

“Boss, already know the name of the thing?” one of the men in the chairs asked the master shipbuilder.

“Funny name for a boat,” the question-asker said, feeling smart.

The master shipbuilder walked to his employee and lifted him from the chair. “You may think that I am not the brightest bulb in the shed, but you are mistaken, buddy. Our client has not yet conveyed the name of this new fine vessel, so I would advise you to keep your jaws together before I take up a mega-stapler and assist you in that.” Then he dropped the man in the chair again. “Clear?”

“Uhhuh.” The employee did not feel very smart any more.

The master shipbuilder then chuckled as he walked off. “No Idea would really be a funny name for a boat.”

“You should be more careful around him,” a co-console-worker of the unfortunate employee whispered as he held up a maimed hand. “I was smart too, one day. He broke most of my fingers, so pushing the buttons is very painful at times. You got off lucky, he must be having a very gentle day.”

“He may yet live to regret that,” another button-pusher added his share of knowledge.

During all that, the shipbuilder stood close to the nearly complete hull of the black ship. It was becoming a mighty fine ship, like the other mighty fine ships that had come out of the production process he had so carefully crafted. The fact that this one was black also made a nice change to the white or wood-coloured ones that most people wanted. The comment of the man he had just given a piece of his mind rang through his head. What would one call a black ship? The shipbuilder was fond of flower in a ship’s name, but Black Flower sort of seemed to miss the point as there were no black flowers that he knew of. The next day the proud owner of the boat would come along, they’d have a talk about that.

As the heavy machines picked up the big beams that would make up the ship’s deck, the master shipbuilder turned to his employees and told them to go home. There had been enough button-pushing for one day, or probably a week. Competition in the boat building sector was murder.