Monday comes, Monday goes, and so does our weekly Indie Promotion. Today I present to you 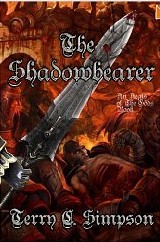 Ebook Short Description: In a world where magic corrupts and kingdoms constantly war, the power that drives the world stirs. It whispers promises of greatness in the heads of the men and women that wield it. Now, it has spoken to the mind of a king.
Knight Commander Stefan Dorn, leader of the Unvanquished, has known only war, death and, victory. All in the name of his loyalty to King Nerian the Lightbearer, a man he idolized.
Until now.
Everything he thought he knew about the King, his people, and his world is coming to an end. At a time when there should be peace, he’s once again called to war.
Torn between shocking changes at home, his family, loyalty to his men and his King, Stefan wishes only to enjoy life away from the battlefield. But with the new campaign comes a rabid, unforgiving enemy and a potential cataclysm.
Follow him as he fights to save his family, his people, his honor, and his birthright from the grips of the shade. Can he save them all? If not, which will he choose, which will he lose?
The Shadowbearer is a rousing and engaging prequel to Etchings of Power and a worthy addition to the Aegis of the Gods series.

Where to find: this e-book is available from Amazon.com. And it’s free!