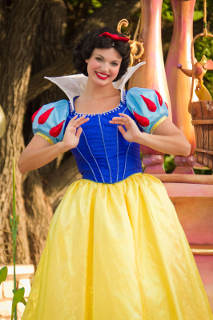 Don’t worry, I won’t go into an in-depth analysis of Snow-White’s psyche. However, there’s something interesting about her and the dwarves, as well as for instance Little Red Riding Hood, Cinderella and more of her contemporaries that I have looked up.

At some point I incidentally came across a discussion whether or not it was legal to use Snow-White and other fairy-tale characters in a story. This because Walt Disney seems to own all of them and a host more. The interesting part in this discussion was that Snow-White herself is long out of copyright. She was brought to life by the Grimm brothers. Another thing would be the names of the dwarves. Those are invented by people from Disney studios, so using those would be a different thing.

The same goes for Hansl and Gretel, Cinderella and all those characters we know from the Grimm and Anderson stories (among others) so well. This may not seem a big deal, but for writers something like this can be very important. There is not much fun in being sued by a large company like Walt Disney or the likes for violating their copyrights. I am glad I discovered this. I may have to take another look at “Snow White revisited”, to be safe and certain.