It is Monday again, so I present to you today’s Indie Promotion: 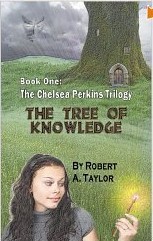 by Robert A. Taylor

Ebook Short Description: “I had a – vision, I guess you could say, of meeting your mom, of having you, and of your future. Then, when I actually met your mom, I knew that the vision was real, and I was going to have to go through with everything I saw in that vision, including leaving you until now.”
“Right.” Chelsea smirked at him. “What are you, some kind of wacko cultist?”
“Not quite.” He looked over at the waitress at the counter. “Chelsea, look at her.” Chelsea looked at the waitress. “She’s about to scratch behind her left ear.” The waitress’ hand reached up and scratched behind her left ear. “Now, a man’s going to come in the door and she’s going to hug him.” The ringing bell of a man walking through the diner’s door startled Chelsea, and the waitress ran over to hug the man who came through. “Now she’s going to sit him two booths from us.” The waitress led the man to the booth Chelsea’s father had indicated.
Chills were running up and down Chelsea’s spine.
“How did you know that?” She was whispering, but she felt like she had just shouted it out at the top of her lungs.
“The same way that I knew I had to marry your mother, that we had to have you, and that you had to grow up without me.” He leaned forward and his eyes were locked on hers. “The same way you knew about the cake, and about my tree. There are certain abilities that run in our family, Chelsea. It’s time for you to learn how to use them.”
Chelsea’s mouth dropped open. “What?”
“I’m sorry that I didn’t stick around to tell you about this, but your personality had to be formed outside of the world that I live in,” he said, almost conversationally. “It was important that you come back to us with a fresh perspective.”
“Come back?” Chelsea felt those chills down her spine again, and it wasn’t pleasant. That sounded a little permanent. “What are you talking about?”
“Chelsea, you need to start learning how to control your gifts. There’s something very important that you’re going to be doing with them, soon.”
He was gazing into her eyes, and she could swear that he was reading her mind. She forced herself to turn away from him and asked, “What’s the big important thing that I’m going to be doing?”
The corner of his lip turned up, just barely. It was not enough to really be a smile, but it was enough to make her think he had to be kidding when he said, “Kill me, for starters.”

Where to find.
You can find this e-book on Amazon.com.