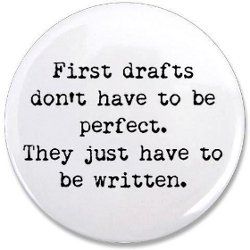 It’s true. And first drafts usually aren’t perfect. Not even mine.

Now wait a moment, scribbler, what do you mean Not even mine? Yes, I see the frowns arise and hear the snickers erupt. Still I have found that there is a huge different in writing draft versions of stories from one writer to the other. I don’t know where that comes from, perhaps certain people write more from their mind or from their heart. Maybe they write the way they think which can lead them from jump to jump, making the first draft a mere collection of thoughts that needs to be straightened out, tamed, combed and looked after before it’s presentable.

I know that my first drafts are already quite good and clear. Someone actually once declared that I write ‘near print-ready drafts’. This isn’t true; once I start reworking there are still plenty of changes, corrections and improvements happening.

That’s something which happens to most writers, I think. After all, once the first draft is done you know what’s happening in the story, there are lots of details that became clear, and in the rework these can be used in other places of the story, as tiny seeds that can lead the reader up to the point where the event actually happens. It’s easier to tweak the plot afterwards, with that knowledge.

Yes. First drafts don’t have to be perfect. Once they’re written, that’s when the serious fun begins. And the end of it is a book that’s fit for people to enjoy.