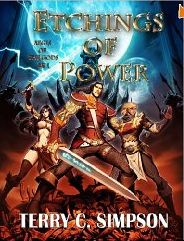 Ebook Short Description: The opening stanza in a new epic fantasy series that delves into the themes of war, corruptible power, love, betrayal, and absolution in the world of Denestia.
Ryne Waldron, a living legend at the edge of madness is haunted by a murderous past and the voices of his power that whisper in his head. Hunted, he strives to defend a village he swore to protect. But his enemies might be closer than he could ever suspect.
Ancel Dorn, a gifted student, struggles with rejection and must accept who he is or perish to the creatures that stalk him and his parents. When he discovers he’s targeted for death by beings that seemed to have stepped from the history of an ancient war, his only choice is to flee.
Irmina Nagel, Ancel’s former lover, and an assassin sent to find Ryne, is mired in her quest for revenge on Ancel’s parents, and must set aside her emotions or fail her final test. What she discovers may not only change her life but the world as a whole.