What better Monday than a Monday that brings you an Indie Promotion! This week:

A Blanket of Blues 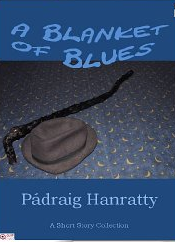 Ebook Short Description: Everybody gets the blues sometimes. Fingers Flaherty had them all the time. He lived the blues and sang about his every ache.
Flaherty’s blues gave him nothing but hardship, sore feet and a shattered heart. Every one of his songs told a fraught story. His characters walked many a dark path and twisted lane on their troubled journeys.
And now they get to share their tales, wrapped in dark humour and a blanket of blues.
A collection of short stories inspired by Flaherty’s songs, A BLANKET OF BLUES presents its varied cast at turning points in their lives. Some yearn for change, whereas others seek self-improvement. And others want nothing more than a little peace of mind, even for just a few hours. Each character struggles through the daily conflicts and irritations of his or her life, fighting back with proud confidence, caustic wit, mule-headed defiance and a dash of reckless optimism.
Each story raises its own questions. How can Moses make a connection with any woman when they all think he’s an alien microbe? Why is Brendan Behan laughing at a hapless father as he makes his way to the nightclub to find his hooligan son? Will God listen to a hypocrite’s prayer and welcome a bitter troll into heaven? What ghosts haunt Mad Mick on his midnight rambles? Is it safe to borrow money from Harry the Hobbit during a recession? Why does Sophia want to insert her beret-clad boyfriend into a guillotine? Can Chai make peace with the dead mother, who only adopted him because there were no rabbits left in the pet shop? And can any of these characters find the positive mental attitude to beat their Irish blues?
Fingers Flaherty drank his blues from the same moonlit stream as every blues singer from Robert Johnson to Bob Dylan. He felt the loneliness of many sleepless nights, the pain of long, hard-travelled days. Hiding behind countless masks, he tried to find himself – in a country that had long ago lost its way. He sang of love and jealousy, sex and betrayal, the bitterness of disappointment and the resilience of hope. In other words, he sang of life, with all its light and all its shadows. Indeed, the shadows were his home.
As Flaherty strums those dark chords on his battered guitar, let his edgy lyrics take you on a journey through Dublin’s back lanes and bright streets, its dingy pubs and affluent apartments, its sweaty clubs and freezing hallways. A city where there’s music in every argument. Where every stranger wants to tell you a tale. And where everybody sometimes loses their way. Even the most philosophical taxi drivers.
A city that Fingers Flaherty wrapped around himself. A city that became his blanket of blues.

You can find the e-book on Amazon.com and Amazon.co.uk where it is ready for download to your Kindle.