CATACLYSM: Return of the Gods 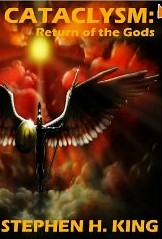 Ebook Short Description: Crystal isn’t sure what to think when she learns that she’s married to and has children by Mars, the God of War. She knows that she’s not giving him up to his ex-wife, the Goddess of Love, without a fight. Venus has other plans, though, and the goddess and the mortal woman square off.

Stephen H. King is a member of the Alexandria Publishing Group. He learned that reading science fiction and fantasy allowed him to escape the strangeness into the more understandable worlds crafted by Isaac Asimov, Piers Anthony, Marion Zimmer Bradley, and many other great writers. As time went on he began to mould his own worlds.

Where to find.
You can purchase the e-book on Amazon.com, readily available for Kindle or any device with the free Kindle reading software installed.