from The Digital Reader by Nate Hoffelder 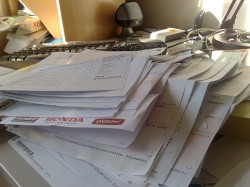 The Online Publisher’s Association has just released the results of a new survey into how people are using their tablets, and it’s a good one. A total of 2,540 Americans were polled in March of this year.  About 760 reported that they were tablet owners, and here are the highlights of how they’re using their tablets:

The above details just scratch the surface of the survey results, which run to 47 pages. It’s well worth a read, but there were a couple points that caught my eye.

This survey confirmed something I’d long suspected. While mobile use is up, it turns out that the users aren’t mobile. A full two thirds of the time spent on tablets is now at home, not while the user is actually in motion.

I’m not at all surprised by this because I’ve been tracking how I use my tablets. For example, right now I have a couple tablets sitting next to me. They’re set to ping whenever I get an email or tweet. I also use them when I want to sit back to read and contemplate someone’s blog post (rather than reading it on my laptop, where I lean forward).

The other point which caught my eye was both a surprise and an explanation for the decline in sales of E-ink screens.

When considered as a reading device, the tablet won out over everything from PCs and smartphones to magazines. That’s not much of a surprise, assuming that the content is well formatted. The bombshell was that respondents preferred tablets over dedicated ereaders like the Kindle: 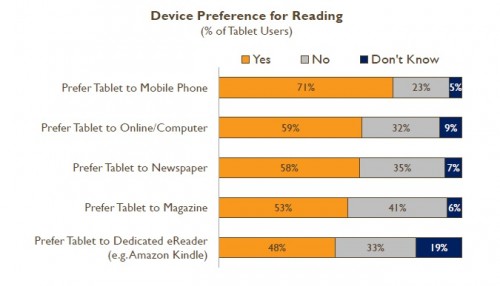 It’s going to suck to be E-ink this year; the ereader market was quite lucrative. Now it looks like it might be disappearing.