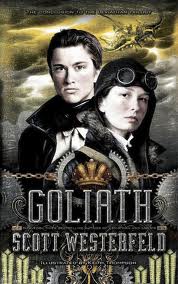 Goliath is the third, and unfortunately also the last book in the series around Deryn Sharp and Prince Aleksandar of Austria. Aboard the Darwinist airship Leviathan they encounter a famous inventor in the hinterlands of Siberia. As intrigue and hidden plans are travelling through the story, the tension between Deryn and Aleksandar is growing. Aleksandar’s loyal men, Wildcount Volger, Master Klopp, and Hans Bauer are there as well, as the First World War is unfolding more and more, despite everyone’s efforts to end it. They also encounter the first moving pictures, and finally the story comes to a very surprising conclusion, in which an invention goes up in smoke, and all kinds of relationships take interesting turns.

Goliath is, as the other two books, a fast-paced book that keeps you on your toes, as action and dialogue fly by. If you like steampunk and remarkable inventions of the mechanical and animal kind, you will love the books in this series. Goliath is part three of the series, part one is called Behemoth and part two is called Leviathan.

If you want to know more about this series or the author, you can read up at Mr. Westerfeld’s website.