Keeping up with Monday’s tradition, I present to you: today’s Indie Promotion:

Nature of the Beast 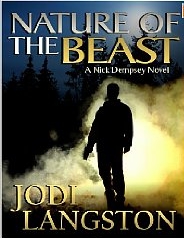 Ebook Short Description: When the doors open at the Star Light Casino in Brody, Minnesota, a serial killer turns it into his hunting ground. The challenge of two unsolved murders and a chance at a fresh start prompts maverick cop Nick Dempsey to leave L. A. and his actress girlfriend Kathy Tyler behind. This lone wolf must learn to be a team player when he takes the job of Sheriff.
After a one night stand with her ex-husband Kathy follows Nick to Minnesota. Tempers flare when Kathy arrives in Brody to find Nick has taken a new lover, Angie Reynolds, a beauty nearly half his age. Fearing for Kathy’s safety Nick moves her into his house. Kathy finds herself a new playmate in Nick’s Deputy Ben. Nick and Kathy struggle with their strained relationship as they both date other people.
As Brody celebrates Heritage Days Nick has his hands full with a town full of tourists, a serial killer and two angry girlfriends. Victim number three is found alive but lapses into a coma and is unable identify her attacker. Deputy Russ Thompson finds a clue at the crime scene. Russ struggles with his decision to remain silent about what he found.
A violent storm descends on Brody putting everyone’s nerves on edge. When both women turn up missing Nick must use all his skills to figure out who the killer is before one of his women becomes the next victim.

Where to find Jodi Langston.
You can find out more about Jody by visiting her blog