I am not one for placing actions and such on my site, but truly, the SOPA (Stop Online Piracy Act) and PIPA (Protect Intellectual Property Act) that the American Government is (they say ‘was’ but do not be fooled) considering, have to stop before it starts. Therefore I place this banner here. 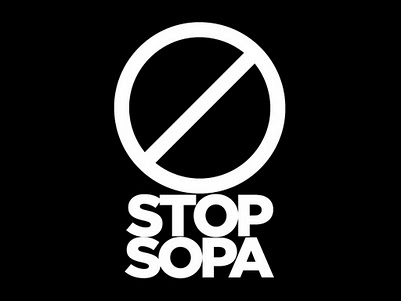 Let’s do what we can to keep the internet free. As far as it has not been un-freed already.

As found on Teleread:

Lest we thought that SOPA was dead and buried, a couple of further developments today have shown that hope is premature. Bill sponsor Lamar Smith is moving ahead with plans to continue marking the bill up and bring it back to the House agenda in February. The DNS blocking provision will be removed from the bill (for now—that doesn’t keep them from trying to add it back after the furor has died down), but it still contains a number of other provisions that could prove harmful to the freedom that is the lifeblood of the Internet.

Meanwhile, former Senator Christopher Dodd, now the CEO of the MPAA, has blasted sites planning to participate in the blackout tomorrow. SF editor Patrick Nielsen Hayden, whose blog Making Light is also blacking out tomorrow, explains it best in a blog post:

The Motion Picture Association of America, chief sponsor and financier of SOPA and PIPA, addresses Wikipedia, Reddit, and other major sites going dark tomorrow, accusing them of “abuse of power.” “It’s a dangerous and troubling development when the platforms that serve as gateways to information intentionally skew the facts to incite their users in order to further their corporate interests.” In related news, the mutilated body of Irony was found washed up against a pier in the East River. She was pronounced dead at the scene.

Not incidentally, what a dreadful end for former Connecticut senator Christopher Dodd, once an idealistic young congressman of the Watergate-era “Class of ‘74,” to end his public life as the spokesmodel for a corrupt and frequently hysterical organization of fantastically wealthy media conglomerates, distinguished in American history for having attempted to persuade Congress to ban videocassette recorders.

It is more important than ever that we not let our guard down against SOPA. Tell your family and friends how bad this bill would be, and convince them to contact their congressmen in opposition to it. If you have trouble articulating why it’s so bad, here’s a great article explaining the many problems with it. This is our Internet—let’s not let paranoid media conglomerates use their made-up statistics to take it away from us.