Dear reader,
It is Monday again, and the first one in the new year, so I present to you: today’s Indie Promotion:

The Pieces of the Puzzle: An NSA Thriller 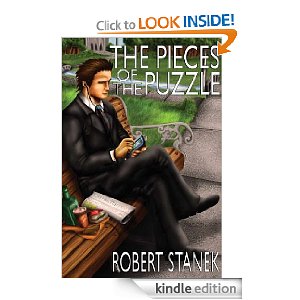 Note: This novel is approximately 65,000 words in length. Optimized for Kindle, Kindle for PC, Kindle for Mac, and Kindle for smart phones.

Scott Madison Evers is the son-in-law of the Chairman of the National Security Council. His wife is pregnant with their first child. While in Munich conducting a rendition of a known terrorist, Scott’s cover is blown. Before Scott can get away, his entire operations team is wiped out, and he alone escapes into the night.

When Scott returns to the U.S., he finds himself a wanted man, and must go on the run from the agency that is trying to convict him of high treason. Now Scott conducts secret surveillance of those he thinks can give him a way out while slowly getting drawn into a web of deceit. Ruthlessly, the other side draws his wife and unborn child into the struggle. Scott’s only hope to save them and himself is to do the unthinkable, and that is what he sets out to do.

The Pieces of the Puzzle: Robert Stanek masterfully creates an intelligent thriller that weaves the excitement and intrigue of a sophisticated mystery with the fascinating secret world of international espionage.